What is a species? And why care?

It helps to define species, even if you can’t be too sure of whether you’re actually getting it right. If I say I saw a picture of a dragon, you will all have an idea of what I saw, even though nobody could possibly conclusively define a dragon. If people know what you mean a lot is won. The same holds in micropalaeontology.

Micropalaeontology is the study of microfossils; the preserved remains of micro-organisms. An example of a group of such microorganisms is foraminifera; unicellular organisms that live in the sea, and produce little shells. That shell is what can remain preserved when the organism dies: the microfossil. They tend to be 0.1 to 1 mm in size. Their use in environmental science is endless; they are widespread and abundant, and there are many different species with each their own environmental preferences. Their evolution is fairly well-studied as well; if you show a micropalaeontologist a handful of foraminifera, he or she can most likely tell you, after barely more than a glance, how old they are, and what environment they lived in. And even their little shells can be studied; they can hold a wealth of information. 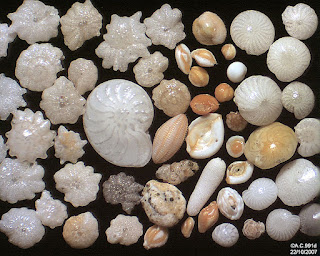 An example of an assemblage of foraminifera; in this case form Myanmar/Burma. Picture: Psammophile. Source: Creative Commons.

But back to the question of subdividing them into species. Traditionally, species have been defined on the basis of shape. Later, when more information became available, environmental preferences were taken into account as well. The whole classification of species was episodically revised, based on new information; the result was an ever-changing system, where not everybody used the same version. But everybody knew that; as long as you knew what classification someone used you knew, more or less, what you were up to. But a certain level of subjectivity cannot be avoided. Not every specimen looks like a textbook figure. But in spite of its confusions and imperfections, the system worked.

And then DNA analysis was invented. Suddenly, it could be objectively determined if organisms belong to the same species or not. And it is done on foraminifera too. When there was a workshop on foraminifera taxonomy (species classification), the researchers working on foraminifera DNA decided to put the old system to the test. They provided the participants of the workshop with 40 pictures of foraminifera of a specific genus of which they had sampled the DNA: they therefore knew which of these belonged to the same species. And now they asked us to group them the old way, and tell us what name they would give these species. 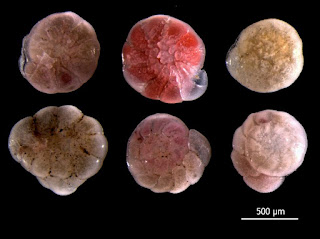 These are specimens of Ammonia beccarii; a species that has sometimes been subdivided into various species, but of which DNA research has revealed that it is indeed only one. Photo: Hans Hillewaert. Source: Creative Commons.

The first thing that became apparent was that it wasn’t an easy job. Every group of experts struggled! And every group came up with slightly different results. And the names assigned to the species did not always match either. That is a measure of the mentioned flexibility in classification, and subjectivity. But then they were shown what the DNA had revealed.

Some results were as expected. Sometimes the old-fashioned method split a species into two different ones, or left a specimen out that looked odd, but that is all within expectation. But there were shocks too: some species turned out to contain specimens that look quite different, and that none of the participants would have considered to be the same species, if they would find them in their samples. That provided food for thought. 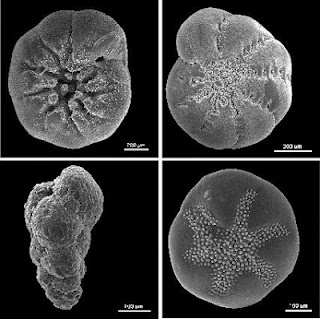 Foraminifera pictures taken with a Scanning Electron Microscope; the top left is classified as an Ammonia beccarii, like the specimens in the picture above. And according to the USGS, the top right is an Elphidium excavatum forma clavatum, but are they sure? This was one of the species that created some confusion in the "shape vs DNA" game...

Does this mean we have to forget about micropalaeontology? No; as flawed as the discipline is, it still answers (and raises!) very relevant questions. And it helps to know how big the uncertainties are. Does this mean we have to now sample the DNA of all foraminifera we study? No; that would be too time- and money-consuming, and beside that; most of the specimens we study are long dead, and don’t contain DNA anymore. So what is the relevance of this work?

To give you an idea of how confusing it is: one of these pairs are two specimens of the same species, but the other pair is two different species. I'm not going to say which is which, but I think it illustrates similarity isn't enough to decide.

One of the things DNA research can do is tell the micropalaontological community which differences in shape are indicative of a different species, and which are just variation within a species. They could improve on their classifications that way. The research can also help in cases where a species seems to be able to adapt to very different environments; can they really, or are we dealing with several species that look the same? Knowing that would tell us something about the adaptability of marine species; quite useful knowledge in these times of rapid change. Various experts probably already have a long list of further questions they would like to see answered, and the process of answering will create a multitude of new questions. It’s even possible we’ll see new species evolve into existence right under our eyes…
Posted by Margot Saher at 12:55