If you find an ice man on a mountain pass, or a mammoth in the permafrost, or the remains of a prehistoric building, and you want to know how old they are, what do you do? You carbon date it. Bob’s your uncle! We use carbon dating too, for dating the sediments we use for our sea level reconstructions. When you read something in the newspaper about carbon dating you are likely informed of the uncertainty. But is that all there is to it? And the answer to questions like that tends to be: no, it’s complicated. And it is. I thought it was worth it to elaborate; sometimes a scientific claim relies heavily on the age of something or other, and quite often that age is determined with 14C.
So how does it work? There is a lot of nitrogen in the atmosphere, and that gets bombarded with cosmic rays. Sometimes an incoming neutron will smash a proton out of a nitrogen atom, making it a 14C atom. Carbon generally has mass number 12; if it does, it is stable, which it also is with mass number 13. This latter isotope is used in all kinds of studies, e.g. reconstruction of the diet of extinct animals. 13C is unevenly distributed over potential food sources, and the enamel of the teeth bears witness to the 13/12C ratio of the animal’s food. But that is another matter.
14C is unstable, and will turn back into nitrogen. Everything that breathes will constantly replenish its 14C. As soon as it dies, though, it will not get any new 14C into its system, and that’s the moment the 14C clock starts ticking. I know of a cartoon where a granddaughter reassures her grandpa it doesn’t matter if he forgets his age; they can have him carbon dated! But that cartoonist hadn’t understood the process...
14C has a half-life of 5730 years. Modern equipment is sensitive enough to detect a signal even after 10 half lives; so on a good day, you can date things as old as 60.000 years. The complicating factor is that you need not only know the half life of your isotope, but also the initial concentration. And that’s harder. Unfortunately, the sun is not constant in its output of radiation. And that gives rise to ambiguities: if you measure a certain 14C activity in a sample, it might sometimes derive from either a not that remote time where solar activity was lower, or a more remote time when solar activity was higher. It’s clearer to see that from the calibration curve, which links “radiocarbon age” (the age calculated as if 14C production was constant) to the “real” age (corrected for solar variations). If you look at that calibration curve from a distance it looks like straight line. But if you come closer, and zoom in to the last, say, 1000 years, you’ll see it  has some peaks and troughs, meaning some radiocarbon ages can equate to more than one calibrated age. 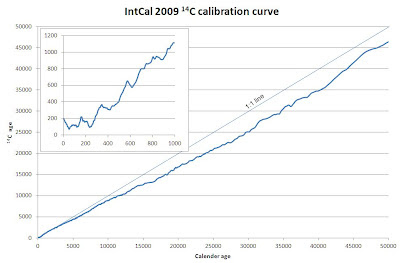 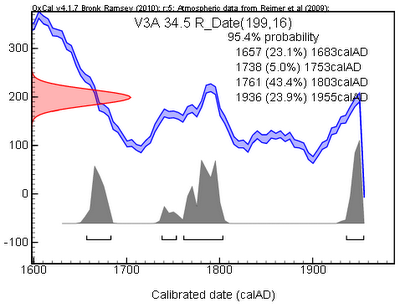 An example of an ambiguous 14C calibration. The last few hundred years are difficult to date with 14C, as the calibration curve there has lots of wiggles. So this sample with a radiocarbon age of ~200 years could, if no other information is available, be from 1657 as much as it could be from 1936. The calibration program used here is OxCal; reference below.

If you have several 14C dates in sequence, you can sometimes solve this issue. If you, for instance, have a sediment core with two 14C dates in an interval with a spike in the calibration curve, then you know it can’t be the case that the upper one is from the older limb while the lower one is from the younger limb. Your younger sediments must be overlying the younger ones! And if you have a whole lot of them, some solutions are more likely than others. And in order to find the most likely result scientists commonly resort to age modelling software. That tends to draw all possible time lines through your dates, and calculate the probability of every one of them, in the end giving you a (range of) most probable age model(s). 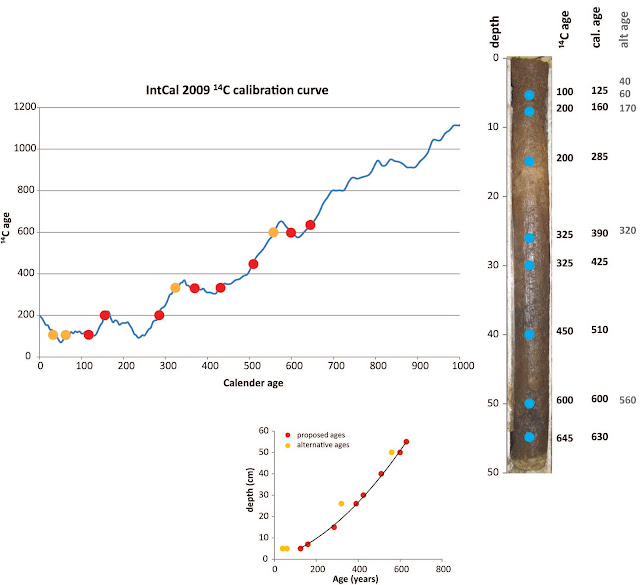 An example of making an age model from a number of 14C dates, some of which ambiguous; we here have a sedimentary core with 8 hypothetical 14C samples (blue dots). The 14C age of these is given to the right of the core; at first glance they don't look too good, as some of the samples give the same 14C age, though being from a different depth. On evaluation of how these could be plotted on the calibration curve, though, it becomes clear a rather plausible age model can be made. The proposed interpretation is given to the right of the 14C ages next to the core, and as red dots on the graph. I added a few orange dots where alternative interpretations are possible. The age vs depth plot below shows why these were not chosen; pronounced shifts in the rate at which the sediments of this core accumulated are needed to explain these solutions.

So even if you have fine 14C dates, you might not be able to assign unambiguous ages to them. Things get worse if the samples on which the 14C measurement was done in the first place were flawed. Two things specifically need to be looked out for: contamination and misplacement. Contamination is easy to picture: say you are dating a very old piece of wood, but there’s a modern wood louse in it. Your date will come out younger than the age of the wood. Radiocarbon laboratories luckily clean the samples they get sent very thoroughly, so in practice contamination will not lead to big errors.
When you want to know the age of, say, a bog body, sampling is quite straightforward. You sample the body and date it. If you want to know the age of sediments, though, you can run into the problem of misplaced samples. You want to find something datable that is representative for the surrounding sediment; something that died there and immediately got deposited with the sediment. A plant leaf that falls down, for instance. But If a beetle burrows down into the mud, and dies there at 20cm depth, it will not reflect the age of these 20 cm deep sediments. The same with roots. They grow down from the surface, and might have died by your hand while embedded in, say, 2000 year old sediments. Careful selection therefore is key.

Examples of what a 14C sample may look like: on the left, a leaf as it appears in a sediment core, and on the right the shield of a non-burrowing weevil after it has been taken out of the sediment and cleaned.

So where does that leave us? In nuance, of course. If a study mentions its reliance on 14C dating you only know how robust that was if you get to see how many dates they had, what exactly they dated, how accurate the measurements were, where they plot on the calibration curve, and how an age model was constructed with that. In a peer-reviewed publication that information would normally be given, unless it’s in a condensed journal such as Science. I know from experience that the range of robustness of the age model in published articles is very large. So after all that, maybe it will be a bit more understandable that scientists often refuse to reflect on any new scientific result until they’ve spelled out the actual source. It might make us very slow in our judgement, but hopefully quite thorough as well! And that may well be an approach that, when used by more people, could well make a difference...