Sometimes it’s important to study the obvious. Among almost all, except some right-wing Americans, it is known that we are experiencing a period of rapid climate change. And with climate change come biological changes. But it matters to find out what exactly is happening; to get an idea of the scale of the phenomenon, and of how various aspects of it interact. So even though everybody can guess that the Barents Sea is warming, and that that must influence whatever small critters are living at its bottom, I spent two years trying to figure out what the difference really was between, roughly, 20th and 21st century foraminifera in that basin.

Some of the foraminifera species we studied

How did that all come about? In the 90s, Morten Hald, Per Ivar Steinsund and Sergei Korsun had made an effort, collecting all available information on which foraminifera species lived where. And in the years 2005 and 2006, a vessel of the Norwegian Institute of Marine Research had gone and collected samples in the same area. My job was to analyse these samples for foraminifera, and compare my findings to the database of foraminifera assemblages that had been compiled. The paper is published in Global and Planetary Change, as 'Changes in distribution of calcareous benthic foraminifera in the central Barents Sea between the periods 1965-1992 and 2005-2006', by M.H. Saher, D. Klitgaard Kristensen, M. Hald, O. Pavlova, and L. Lindal Jørgensen, to be found here.

We found changes indeed. At my sample sites, temperature had on average increased by almost 1°C. All the cold water species had lower abundance in the 21st century than in the 20th. Evident? Maybe. But yet another small piece in the whole picture of how exactly various species respond to climate change.

Our main goal had been finding out which species had changed in abundance and how, but just out of curiosity I also wanted to calculate how big the total change had been for each sample. I found an appropriate method for quantifying change, calculate a value for each sample, and had some mapping software produce a map of the results. When it came out I was surprised to see a clear pattern. A band of highest amplitude of change followed the general outline of the maximum ice edge in spring. I hadn’t expected that! 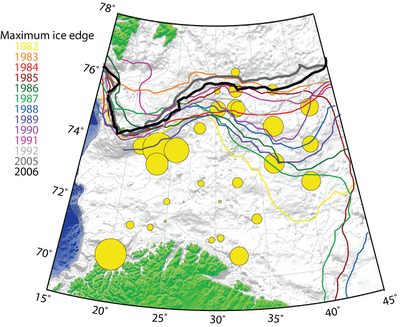 The main figure in the article (but changed in style as to not breach copyright), with the yellow circles indicating the amount of change between the 20th and 21st Century as found in the foraminifera assemblages.

The maximum ice edge is a place where many things come together. In the Barents Sea, inflowing Atlantic water mixes with polar water. Where these waters meet tends to be where the ice edge is. Atlantic water is too warm to freeze over. And the water covered in ice doesn’t receive much sunlight, so there isn’t much life that can eat the nutrients in the water; at the ide edge, the wind can stir them from underneath the ice. That makes the ice edge a very productive region. And now we found it is not only where life is abundant, but also where it changes in abundance.

So what are the implications of this? With the cold foraminifera species vanishing from the Barents Sea, they may soon vanish altogether. They can’t move much north from there. Will anybody miss them? They are not charismatic macrofauna, after all. But it would be a few more species gone, which are fascinating, if only you are willing to find out.

And if there was already such change happening in the pre-2007 years, it would have been very interesting to see what 2007, the epicyear of low sea ice, would have shown. That year is famous for its summer ice minimum; not its spring ice maximum. But that was low too. 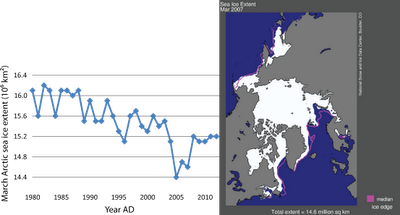 The research vessel did set out to collect samples in 2007. Unfortunately, the weather was too rough, and no samples were collected. The next year, the ship didn’t even go. So there is still much to find out at the bottom of the Barents Sea. I hope some time in the future, someone will go back there, collect samples, and then write a comparison with both the 20th century database and this work. I am quite keen to see what’s going on there in the post-2007 years…
Posted by Margot Saher at 10:47