The Hockey Stick and the Climate Wars

I love depressing books. Give me characters that make the wrong decisions and slowly crumble ever after because of it. Give me gross injustice. But I want it to be fiction; I like suffering as a concept, as an art, not as something that happens to real people.
I just finished a book that has plenty of injustice and suffering in it; unfortunately, it wasn’t fiction. It made me sad and frustrated. I knew it would. It was “The hockey stick and the climate wars - dispatches from the front lines”; the account of Michael Mann of the creating of the famous hockey stick graph, and the subsequent barrage of the denialist lobby on him, his colleagues, and his work. 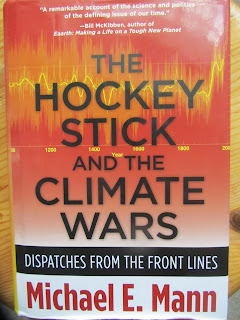 The book describes the changing times; it starts with Mann’s early career, when climate science was still just another science. It describes the research that lead him and co-authors to publish the hockey stick in the late nineties, and its incorporation in the IPCC’s third assessment report in 2001. And that was when the excrements hit the fan. As the hockey stick makes the problem of anthropogenic warming readily understandable to all, and featured prominently in something as influential as the IPCC report, it was a target the petroleum lobby could hardly ignore. Mann describes his utter unreadiness  for the attacks that came; he was just a scientist, trained in scientific discourse, and not in mud-throwing with lay people. Very, very recognisable, I suppose, to any scientist.
The cycle of attack and counter-attack followed the political diary; attacks intensified in 2003, as the Climate Stewardship Act would be voted on; if it would pass, emissions of greenhouse gases would legally have to be curtailed. Denialists tried everything to discredit the evidence; none of it stood up to scrutiny, but they did create doubt. And the bill didn’t pass. Because of the denialist lobby? Hard to say, but the fact that that possibility can’t be excluded is chilling.
In 2004, Mann and colleagues realised you can’t fight this battle in scientific literature, as their opponents would generally not venture there. Neither does the general public. If you want your voice to be heard, you have to find other outlets; the RealClimate blog was founded. 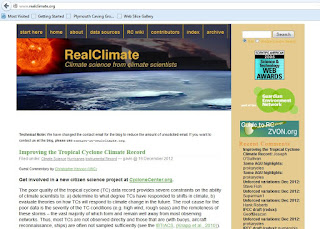 The RealClimate blog
Then the battle got harder. The year 2005 saw the attack of republican senator Joe Barton, who either thinks, or wants others to think, that any science suggesting the existence of anthropogenic warming is fraud. He demanded from Mann and several others all the information their work was based upon, all correspondence about it, the dates of any relevant meeting, and more of such absurdities. Is there anyone in the world who can give such a detailed account of their work? Luckily Barton had no legal ground to stand on, and the climate scientists could ignore him, but it was clear that the deniers were stepping up their game. If they could enforce such demands, work would be impossible for climate scientists. Exactly the desired effect. And just the threat of this lingering in the air might put people off from letting their voice be heard.
I remember this attack happening; I was doing my PhD in Amsterdam at the time. We were all upset and worried. And one of us was courageous: Gerald Ganssen, our colleague, and then president-elect of the EGU (European geosciences Union), was the first to stand up and condemn this attack. I was proud when I read this event narrated in the book. After the EGU many other scientific organisations spoke out.
In 2007 things were looking up; Al Gore drew global attention to global warming with his Inconvenient Truth lectures, film and book. Together with IPCC, he received the Nobel Peace prize. It looked like the deniers had lost, and science prevailed. But it was not to be. The worst was yet to come.
Then ClimateGate hit the global headlines. Private emails were stolen, and taken out of context. As Mann phrases it: "imagine how unpleasant it might be to have your private emails, text messages, or phone conversations mined by your worst enemy for anything that, taken out of context, could be used to make you look bad". That’s exactly what happened. And the right-wing media lapped it up. And it worked: a lot of doubt was cast, again, and the timing was pristine; the e-mails were published just before the Copenhagen Summit, and everybody knows what a success that was. And if that publicity stunt wasn’t enough, Mann also describes attempts to bribe his colleagues into accusing him of fraud. It didn’t work. And he quotes from some of the hate mail he received. Did I mention already this book is not a happy read? 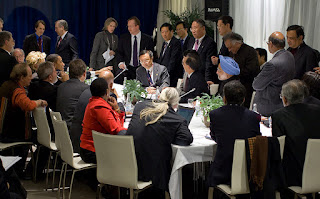 At the 2009 United Nations Climate Change Conference (Copenhagen Summit)
Several official investigations were performed to check if anything untoward was uncovered by the hacking of the emails. All investigations concluded it hadn’t: all scientists were cleared of any wrongdoing. Unfortunately, that fact was conveniently ignored by most mainstream media. The scientific community noticed, of course, and was relieved, but the damage done to public perception of climate change hasn’t been undone.
The clearing of the scientists didn’t stop the attacks, either; in 2010, attorney general Cuccinelli tried the Joe Barton strategy once again, demanding impossible amounts of documentation on Mann’s work. Again it didn’t work; a legal base for any investigation was (again) found lacking. But it did clearly convey the message that when you were a climate scientist, you were still considered fair game.
Mann ends the book on a positive note; he says awareness of global climate change is growing, as is insight into the machinations and funding of the denialist lobby, and thereby their credibility. Public indignation on how bona fide scientists are treated is increasingly voiced. Would this time the tide really be changing? Let’s just hope so. And Mann himself? He has clearly not lost any of his fighting spirit. He concludes with “I am determined to do whatever I can to make sure it will be possible for us to return (to the Florida Keys, MHS) decades from now – my wife and me, our daughter, her children, and perhaps theirs – to again marvel at these natural wonders. While slowly slipping away, that future is still within the realm of possibility. It is a matter of what path we choose to follow. I hope that my fellow scientists – and concerned individuals everywhere – will join me in the effort to make sure we follow the right one”. 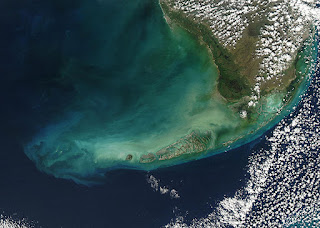 I hope countless many people read this book. It provides an unprecedented insight into the war between science and oil industry. And it’s hard to read about an author of such ground-breaking work being bullied and threatened, but it’s uplifting to see it hasn’t broken him. And the book is both well-written and incredibly well-documented; it has over a hundred pages of notes.

While reading it, I did hear the voice of the devil’s advocate in the back of my head. “Of course he would say that! Of course the denialists can’t get their criticisms published in scientific literature – it’s a conspiracy!” And all that. And of course the book is subjective, by its very nature. But if you adopt the assumption climate science really IS a hoax and/or a conspiracy, you have to accept that it has the legal systems all over the world in its pocket. Otherwise all the investigations into the conduct of the conspirators would have yielded something. And if it has such power, than how come it can’t seem to force emission reduction legislation into being? Wasn’t it a conspiracy to bring the leading economic nations to their knees? Not a very effective conspiracy, then. Or is all that power then used to maintain the status quo, where climate science wrongly claims that global warming is occurring, the powers that be are allowed to ignore that and keep emitting greenhouse gases, and though climate change doesn’t happen, the scientists will still get funded to study it? That sounds a bit ineffective too. The only logical explanation of all of this is still, I’m afraid, that climate scientists simply are bona fide. And if nobody listens to Cassandra in a white lab coat, reality will catch up all too soon…
I know most people considering reading this book will already be at the side of science, and it is therefore unlikely to change many people’s minds on climate change. But it does provide a compelling read. Do judge for yourself!

...and some shameless self-promotion to end with...
Posted by Margot Saher at 09:58