Microfossils: for the 19th or 21st century?


Microfossils: the word alone is enough to send many people to sleep. Who would study them? Aren’t these today what they were in the 19th century: a nice eccentric hobby for rich men with lots of time on their hands? And of no practical use? 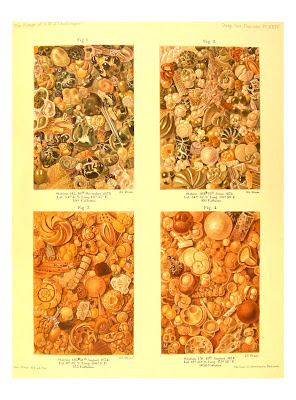 A page from one of the reports from the Challenger expedition (1872-76), depicting sea floor sediments which contain many foraminifera. The report on foraminifera is still used as reference material; as recent as in 1994, another edition was published.
Microfossils have taught us much of what we know about the world we live in and how it changes. Consider, for instance, an archaeological excavation, and how pollen tell us of the vegetation at the time the site was occupied. But microfossils can do much more: an example that can illustrate the amazing amounts of information they contain is provided by foraminifera. Foraminifera are a group of unicellular organisms that live in the sea. Some species live floating around in the water column (planktonic foraminifera) and some live on or in the sediments on the sea floor (benthic foraminifera). They build exoskeletons (also called tests or shells), made of either calcite or material they find around (a bit like some fly larvae; some have been coerced into making their protection from gold; see pictures here). Their name means “Bearers of holes”, as their calcite skeleton tends to show pores. They are found almost everywhere in the world ocean. There are thousands of species of foraminifera, and they all have their own living preferences. When they die, their bodies decay rapidly, but their skeletons can be preserved for hundreds of millions of years. And the physical and chemical composition of the (calcitic) tests reflects the sea water they were formed in. So if you stick a core into the sediments on the sea floor, you’ll have a column of little measuring devices in neat chronological order. 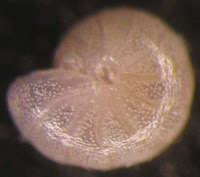 A Melonis barleeanum, clearly showing the pores that gave this group of organisms their name


So how do these tiny snail-like things record anything? The distribution of the various species already provides a wealth of information. If from the bottom of the core up you first find cold water species, and then increasing numbers of warm water species, most of which first being those that prefer fresh organic material as food, and then later species who don’t mind their food having gone off massively, you already know quite something about the changes that happened where you took your core. And some species have very convenient properties: for example, Globigerinoides ruber generally forms a bog-standard white calcitic tests, but in warm water (>~25°C) it can make pink ones too. And Neogloboquadrina pachyderma can coil in two directions; in water between freezing point and ~5°C it coils almost exclusively anticlockwise, and above ~10°C it coils largely clockwise. So one glance through the microscope can sometimes tell you the approximate temperature of the sea water the creatures lived in. 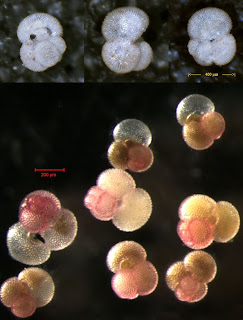 Globigerinoides ruber in both the white and the pink version. White: picture by C. de Vargas. Pink: from foraminifera.eu


The amount of information you can tap into increases greatly if you study the calcite the tests are made of. The oxygen in the CaCO3 provides a lot of clues: Oxygen has several stable isotopes, of which the most common is 16O at ~99.7% of all oxygen on Earth. Another stable oxygen isotope that is often used in palaeoclimate studies is 18O. These isotopes have slightly different physical properties. As 18O is heavier, water molecules containing it tend to evaporate from liquid water with a bit more difficulty, and when they do, they rain out of the atmosphere a little bit easier. It also leads to 16O preferentially evaporating from the ocean and precipitating on the continents, which means the high latitude ice sheets are relatively enriched in 16O. Measuring the 18O/16O (δ18O) ratio in a series of foraminifera that span hundreds of thousands of years will thus reveal the familiar see-saw pattern of glacials and interglacials, which is also found in the CO2 and Deuterium records from ice cores. In this indirect way, 18O can be used to date records based on foraminifera tests. 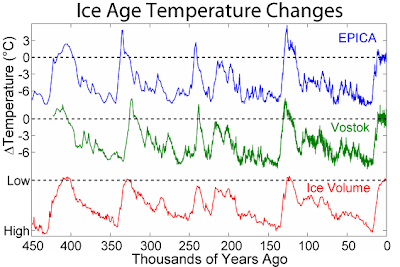 More information is stored in the chemical composition of the calcite; it does not consist of pure CaCO3, as some of the Ca2+ atoms are replaced by other bivalent cations, such as Mg2+ atoms. As incorporating atoms of the “wrong” size in a crystal lattice requires extra energy, this occurs relatively often in warm environments, due to the ample availability of thermal energy. The ratio of Mg to Ca in a calcitic shell therefore is a measure for past sea water temperatures.
These measurements can be performed on many tests at the same time; this will provide a measure of average conditions. They can also be measured individually, which gives information about only the lifespan of the individual organism. And it is even possible to blast the tests with laser beams, and measure the CaCO3 that then evaporates. (A nice picture and explanation can be found here.) That will give the evolution of the temperature of the water the creature has lived in through the course of its life. 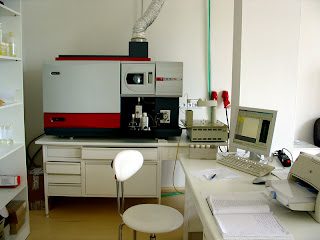 Given how specific one can target what to measure, a wide range of oceanic conditions can be reconstructed. For instance, a researcher who wants to reconstruct the stratification of the ocean could measure the properties of the tests of a shallow dwelling species and a deeper living species. When the signals resemble each other, the water masses were thoroughly mixed. Large differences point to well-developed stratification.

You want to know how strong the circumpolar current, which flows all around Antarctica, and keeps the continent thermally insulated, has been through time? Drill a core where it currently flows, one core at its furthest reach, and one core just outside it reach. And then check the amount of polar and temperate species in all three through time. 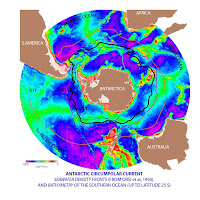 Do you want to know how strong the Gulf Stream was? This current brings warm, salty water to the North Atlantic, where it cools down, and sinks to the bottom. Drill a core somewhere in its path, and check the temperatures as documented in both the surface-dwelling and bottom-dwelling foraminifera. If the difference is large, the Gulf Stream was likely strong.

Do you want to know how strong the Indian monsoon has been through time? The summer and winter monsoon seasons both have a cooling effect on the sea surface temperatures; the stronger the monsoon, the colder the sea water gets. And each monsoon season has its own distinctive foraminifera assemblages, so these temperatures can be reconstructed independently. If you measure single specimens, you will also catch the few individuals that live in the very warm water between the monsoon seasons.

All of these examples of course come with their caveats. The reconstructions you can make of these features are not perfect, but if you corroborate them with other measurements you can paint a very detailed picture of how countless many aspects of how the world works. And if you know what it does, you may be able to find out why it does it, and that may tell you what to expect for the future. So even though staring down a microscope staring at small things that look a bit like miniature cauliflower might feel very 19th century, it might actually be part of cutting-edge modern research! 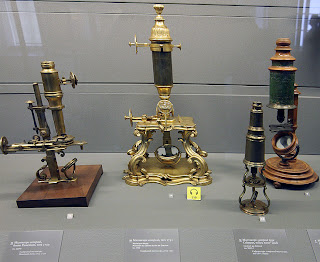